This Union Street promo was one of the last items I desired to have before things happened that made me stop being a collector of Erasure releases. 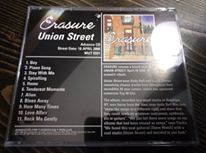 Mainly for one reason. One of the URLs at the bottom of the CD is Erasure.org.

David and I put a lot of work into Erasure.org. Our work on the site got heavy focus in stateside and online promotion, even getting enough attention to do giveaways for other labels that featured Erasure tracks.

For the Retro:Active compilation, we were consulted by the producer and asked to choose a track and we selected the Blue Savannah Out of the Blue Mix specifically due to its rarity and commercial unavailability on CD. (We couldn't pick unreleased non-US tracks unfortunately.) And there was also that Genderfix EP that had a remix of Boom Boom which we were given extra copies of to give out to fans. Then Retro:Active 2 featured the full Madhouse Mix of State Farm, another track that I recommended due to it unavailable on CD at the time.

That was pretty cool to be a part of, to actually be able to be recognized as a fansite that took things seriously enough for other labels to reach out to.

Then someone at Mute NA decided to put us officially on their email press releases and promos for the promotion around the time of Union Street. It was a nice feeling to have that confidence in what we were doing.

Some time after... Mute UK, I was told, basically ordered Mute US to stop giving us info to publish because we ended up scooping the official Erasure updates once or twice.

We ended up completely in the dark. Reduced to nothing more than a site that reposted the EIS email newsletters.

In hindsight, think it was at that exact point that I was done. It was just gone. All of it. The magic. The interest. The desire. The fucks. (2006 was a particularly bad year for me.)

Those who were around at this time may remember shortly after this album was about when I did very last update to Until the Twelfth of Never release which was also around the time of the shuttering of Erasure.org.

Amusingly... When Mute was bought out by EMI, the EMI site for Canada continued to feature the Erasure.org domain on their product listings for new releases. 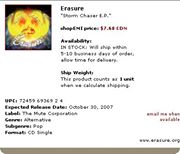 It only took me 12 years to finally score this promo. And now it feels like the book is closed on that time in my life...

I still kind of want a cease and desist letter from Mute. Just something nice to frame and put on the wall.
1 comment:

Since my musical tastes tend to vary dramatically (I listened to 50,000+ tracks on shuffle on my MP3 player on a regular basis), I am often fond of things that haven't been done before. Anything new. Anything, even if not completely new, is still a sufficient twist on the old. Mashups that may not be perfectly in key but still sound good enough, two completely disparate genres melding together well... things like that.
During a DJ set at Neo, I tried to introduce as much new-not-new material that would be familiar enough to the crowd while offering a taste of something different.

It did not go well.

Despite being a goth club... I managed to clear the floor by playing the Vince Clarke Remix of Depeche Mode's "Behind the Wheel."
And that was one of the best Depeche Mode remixes in recent memory.

So I tried to steer the set towards more typical versions.

Even that didn't go well.
I had someone complain when I later played Faith Healer by Recoil, which in itself was a pretty big goth club hit.
"Who is this? I don't like it."
Now, I couldn't just say "Recoil" because that wouldn't have been a satisfactory answer to someone from a fickle crowd. So I said: "It's Depeche Mode and Nitzer Ebb."
"No, it isn't."

Sigh. And this was within 3 months of Douglas McCarthy headlining at Metro in Chicago. 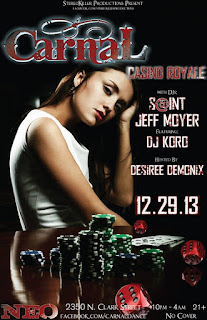